Why Invest in Solar Power

Geelong solar power, Viable investment? New rebates now mean up to 50% of your solar may be covered by Federal and State Governemnts

Solar power can and does now put a new spin on the saying ” Nothings certain but death and taxes “. If the sun doesn’t come up tomorrow then we have a lot more to worry about then whether you will save money from our solar system. Below are some reasons why installing solar power in  Gellong is a safe and reliable investment.

Solar is a proven and reliable technology

Solar panels have been around for a long time now and have proven their reliability. So when you put your money in solar, you’re not investing in the latest shiny object.

Some solar systems installed in the 1970s have lasted far beyond their warranties and are still producing. And while it’s not a new technology, improvements in recent years have made new systems even more reliable.  Now systems offer 10 years warrantees with expected life spans over 25 years, The ability is vert to pay for its self over and over again.

Solar is a relatively simple technology, with few moving parts. Solar panels are durable and require little maintenance. They’re easy to install. This all adds up to a low risk when it comes to solar technology.

The Sun and our future, Shinning bright

All signs point to the sun shining for another 5 billion years. Most of us expect to recoup our investment well before then. Are you aware that the sun shines enough rays on the Geelong  every day to power to power us for over 10 Years. If countries like Germany can make great use of this resource, imagine what we can do in the Geelong, where we have a lot more sun. The sky’s the limit!

Solar systems in Geelong are tangible

Investing in a solar project is not the same as investing in a company’s stock. When you invest in a business, you can’t know how successful it will be. And the stock market is so mysterious and volatile that a company’s announcement of solid earnings can be met with a tumble in their stock price.

When you invest in a solar project, in contrast, you’re buying into a tangible asset. And it’s an asset that depends on a proven technology using the rays that we know will keep shining on it. That means the asset is likely to produce revenue right away, and to keep producing it.

So if you put solar on your own roof in Geelong, you can be confident that it will produce power for you. And if you invest in a solar project elsewhere, you can know that your investment is backed by a tangible, revenue-producing asset.

Solar systems in Geelong save money

Maybe you’re convinced by now that it makes sense to invest in a solar system. But if you need one more reason, we have a good one for you.

Say you invest in a project backed by a revenue-producing solar asset. How do you know the parties involved in your investment will hold up their end of the deal? Like we said, nothing’s sure but death and taxes. However, the likelihood of the solar parties defaulting is low.Why? Well, they’re already paying their power bills (or they wouldn’t qualify for solar). The solar system will lower their bills, making them even less likely to default. So solar not only lowers their bills — it lowers your risk.

With the price of sale reducing substantially over the last 4 years and the costs of fossil fuels rising, solar is poised to become a better investment all the time. I’m other countries its already starting to outperform standard bench marks, and major investors are taking note. Now the chance to invest in Solar power  is becoming available to the rest of us. 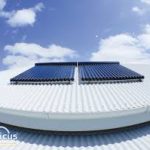 Solar Hot Water – Is it Worthwhile?Blog